Ulaan Ude to Irkutsk, Lake Baikal and Beyond: 457 Km

[SO I epically fail at posting as I travel, but I hope to make up for it over the next couple of days..]

The distance between Ulaan Ude and Irkutsk is relatively short, so we opted for a night train that would get us to Irkutsk early the next morning. Each train transfer is slightly treacherous, as our train tickets are listed in Moscow time so its important to be absolutely sure that you’ve figured out the time changes adequately. Anyways, on this leg, so far so good. We pretty much got on the train, and fell asleep…

Waking up in Irkutsk. Now we opted to go straight to Lake Baikal to spend a couple days at the lake, so our awesome hostel owner Jack, picked us up for the 45 minute drive to Listvyanka , the lake side town where we would be staying. Our hostel was about 15 minutes away from the main drag, and was amazing. Basically what comprised our hostel was someone’s summer house renovated with dorms and private rooms, fully stocked kitchen and even a traditional Russian Banya. My intrepid travel companion and I pretty much had a 4 bedroom dorm to ourselves , which was incredibly cozy. After a quick nap, we of course moved on to look at the rest of the town.

One of our hostels cabins

Retropark filled with statues made of old soviet car parks

Retropark filled with statues made of old soviet car parks 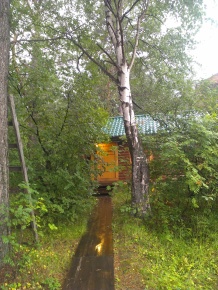 Listvyanka was founded along the shores of Lake Baikal, and it is spread out over 6 km and 3 valleys. It honestly reminds me… so much of Tahoe, possibly of Tahoe 40 years ago, with private guest houses all over the place and no major chains. Overall I found the general atmosphere charming, and wandering around was pleasant. There were markets full of people selling omul or smoked fish, and traditional cedar handicrafts. We visited a museum about the lake, and even though the majority of it was in Russian I would like to say that we learned the lake is both deep and fresh. It also has seals, which we SAW as we were walking back to our hostel the second day. Our big excursion of the trip was a boat trip out to the Circum-Baikal Railway, a portion of the Trans-Siberian which was built in the early 1890’s, which was feat of human engineering, comprising building 33 tunnels along the lake side, as well as 200 bridges and trestles, along with carving out the space for the train to run through rocks and cliffs.   Eventually a new route was discovered for getting the materials to Lake Baikal, and after twenty years or so the line fell into disuse . Now you can book a tourist train that runs twice a week, or just plain walk the rails. Apparently you can trek along the lines, which would take around 6-7 days. “You don’t even need to bring water, the lake is clean enough to drink! ” So the guide told us. All for next time.

lake baikal from a boat

one of the bridges along the circum baikal railway

one of the workers homes along lake baikal

along the shores of the lake

modeling on the lake side

After our time in Listvyanka was done , we took the bus for a day in Irkutsk before getting back on the train again. We got to our hostel in Irkutsk in about an hour after leaving Lake Baikal, and after relaxing for a bit we headed out into the so-called Paris of Siberia.

There are many reasons why this town is famous . Its beautiful and has beautiful architecture. It lies smack dab in Siberia of all places. All of these things combined with a fascinating history, mostly as a refuge for political exiles like the Decemberists (aristocratic political reformers, not the band) , make this place a wonderful place to explore. A day wasn’t really enough, but I occasionally think to myself that Russia, is large… there is no way we can see everything that people recommend. Irkutsk honestly reminded me of how a western boom town would feel if built with an asiatic/european city. The buildings are a mix of cultures, small and built on slightly crooked streets. We walked around what seemed to be a million statues of Lenin among newly developed pedestrian streets containing western style restaurants and clothing chains. I will always enjoy the sight of a Levi’s store on Karl Marx Street, any day.

hint of mongolia with a sukhbaatar street 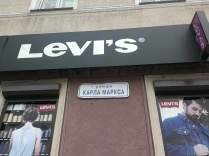 old and the new 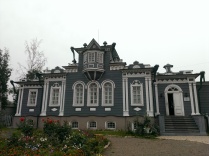 a house museum – one of the Decemberists lived here

Before we knew it we were off again. We got up early in the morning, trekked out to the train station about 5 minutes away, and easily found our train car and cabin. This was going to be our longest leg – our two day jaunt to Yekaterinburg.

I will leave you at that, stay tuned for the next post – V.